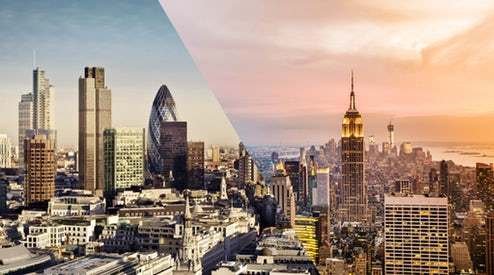 RESULT: Only 2.77% true (or 97.23% wrong), based on homicide data for each city spanning January 2016 onwards and up to December 2018 using date from the New York Police Department and the London Metropolitan Police.

A reccurrent comparison surrounding crime levels in the UK and the USA is the insistence that London is now "more deadly" than New York City. This was carried by numerous news outlets in each country after the number of homicides in London overtook the number of homicides in New York for the month of February 2018, during which 18 homicides were recorded in the British capital whilst only 16 were recorded in the Big Apple. The news broke amidst a backdrop of rising crime levels within the UK (believed to be in no small part down to the decreased funding for police across the country and therefore reduced numbers of police officers on the street as well as longer response times) and many outlets and commentators believed this to be the new norm. Is the home of Westminster really more deadly than the city once known as "Americas murder capital"?

No. From the data available from both the New York Police Department and the London Metropolitan Police, the data distinctly and almost unanimously says the opposite. Granted, February 2018 did see more homicides in London (18) than New York (16) but this appears to have been an anomaly as each and every other month spanning from January 2016 to December 2018 shows the number of homicides to have been lower in the UK capital, often significantly. The tightest difference over the 38 month period was June 2017 which saw a difference of only 2 homicides, London suffered 21 whilst New York suffered 23. Alternatively, the greatest difference occurred in July 2016 when London recorded only 5 homicides to New Yorks 34, a difference of 29.

Below, the graph charts show the differences between each month. 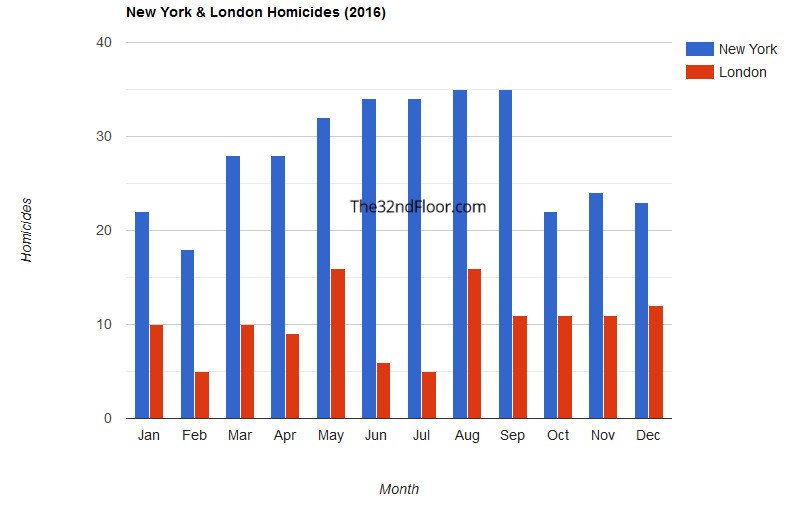 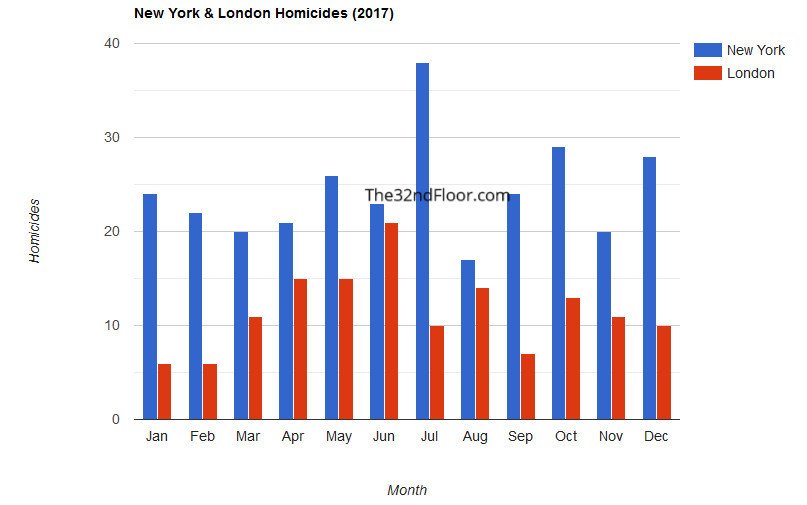 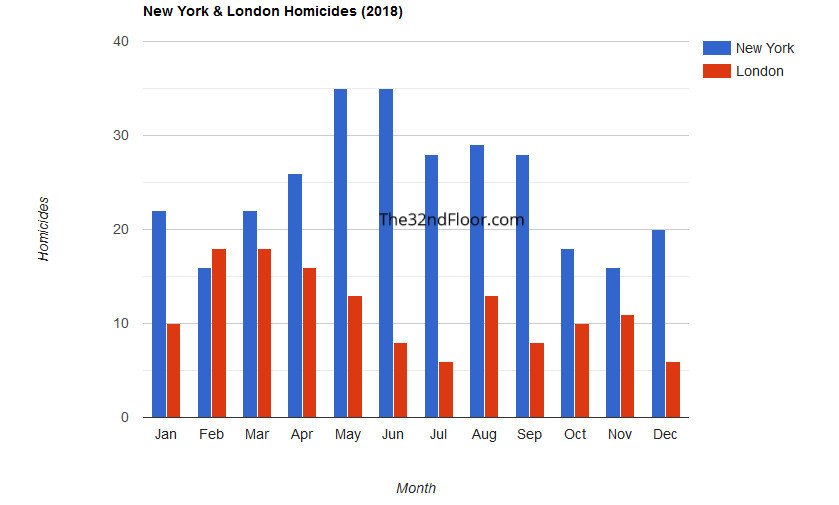 Evidently, the claim that London is now generally more deadly than New York is false, or at most only 2.77% "correct". The month of February appears to have been an anomaly, a particularly bad month for London co-inciding with a particularly good month for New York. There appears little evidence to explain this occurrence and admittedly is may be purely down to simple happenstance, however one feasible explanation could be due to the cold weather causing more people to stay inside. New York was specifically colder during this period and as a similar example, the recent "polar vortex" in Chicago in early 2019 also lead to a sharp drop in shootings, and the city also saw its lowest number of January homicides since 2010 (with 20). However, when temperatures rose again the city was hit with a burst of gun violence, seeing 24 shootings and 5 fatalities in one weekend.

Even if London was slightly more deadly than New York, often considered to be the "safest big city" in the USA, there is a vast amount of cities within the fifty states that far outstrip the Big Apples homicide rate. Research compiled by "The Trace" (as seen below) shows the three deadliest cities in the USA to be Detroit, St Louis and New Orleans with a homicide rate of a staggering 46 per 100,000. Other less-deadly cities such as Tulsa still record astonishly high homicide rates. New Yorks Homicide rate of 3.39 for the year of 2018 is scarce in comparison whilst Londons rate of 1.55 for the same year is even smaller. 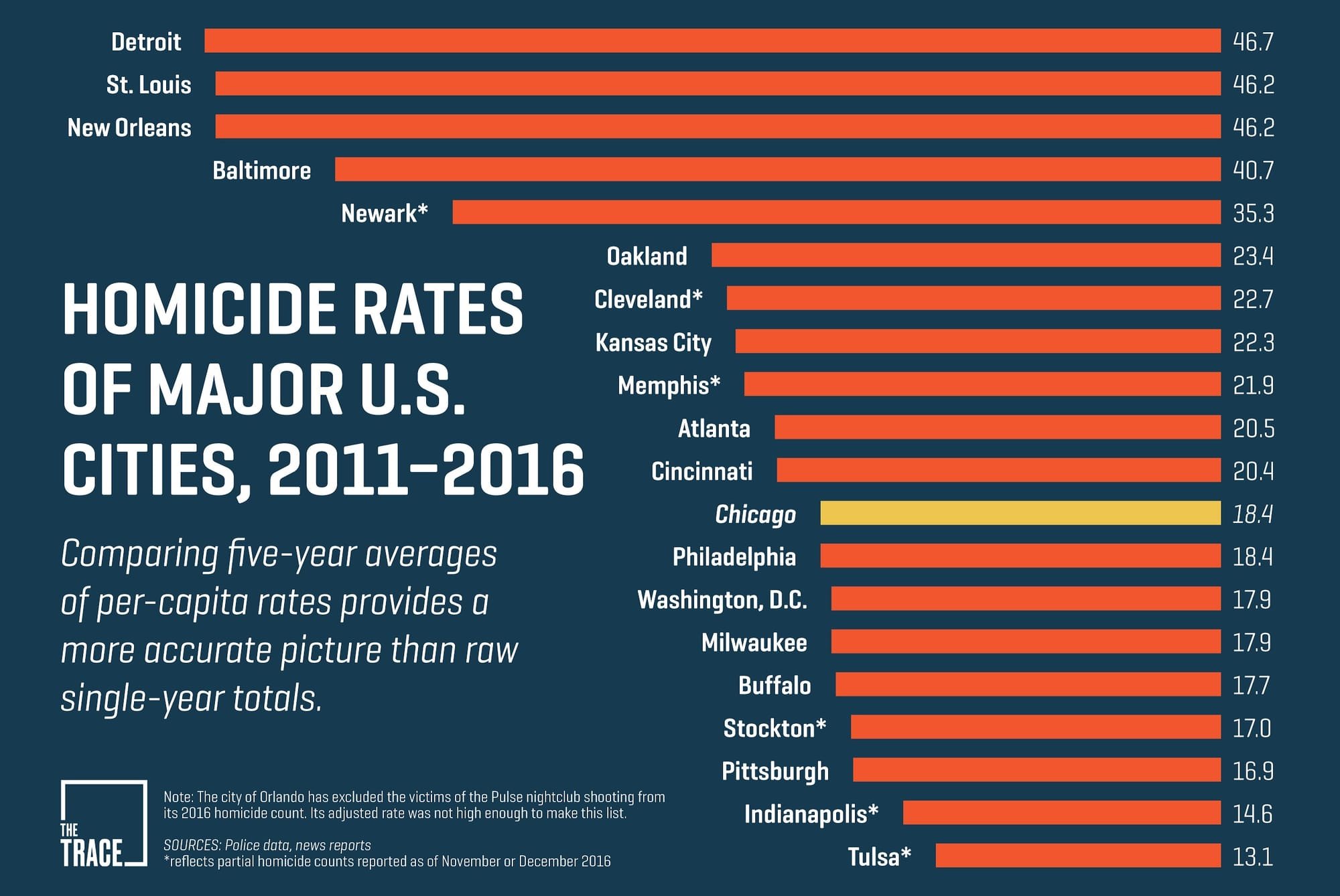 A final thought is that the homicide levels for London in 2018 (137 for a rate of 1.55) was one of the highest for 10 years, whilst the homicide tally for the same year in New York (295 for a rate of 3.39) appeared to be "the lowest in several decades". Therefore, London at its worst still appears to be safer than New York at its best.

(This article followed the timescale of January 2016 up to and including December 2019, so as to analyse a set period surrounding either side of the specific month of February 2018. A separate update article will follow the two cities from January 2019 onwards so as to compare and contrast the two in a more recent state of way and their progress in the current time.)