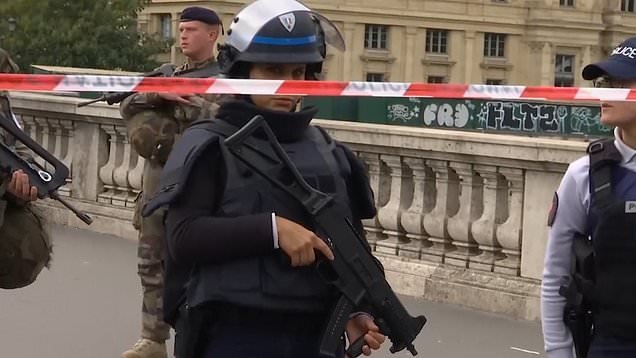 Four people have been killed (three police officers and an administrator), another has been injured after a stabbing rampage at a police headquarters in Paris, France. The injured is believed to be in a stable condition.

The attacker has been identified by French officials as 45 year old Michael Harpon, a deaf long-term employee of the Police Prefecture who is believed to have worked there for around 20 years.

Harpon allegedly used a ceramic knife to carry out the rampage at around 1pm, which caused the area to go into lock-down. Harpon is believed to have used this specific type of knife to avoid setting off metal detectors within the building, and is a similar type of blade to that used in an attack on French prison guards in Conde-Sur-Sarthe in March this year (in that instance the knife was smuggled in by his wife).

The attacker was shot dead by police outside the building by a young police intern.

Given Harpons connection to the building and the people inside due to his long-term employment it is possible the attack could be an instance of workplace violence (similar to that of attacks in Aurora and Virginia Beach earlier this year). Police union leader Jean-Marc Bailleul insisted the attack may have been a “moment of madness” as opposed to any significantly more sinister.

France has been hit heavily by terrorist attacks in recent years. High-profile attacks such as the November 2015 Paris attacks, and the Nice truck attack, have led to significant amounts of casualties. However whilst terror attacks within the country appear to have eased off in recent years, Jihadist-inspired knife attacks have remained recurrent, particularly against policemen and soldiers. In June 2017, an officer was the victim of a hammer attack, whilst days later a Gerndarmerie vehicle was rammed by an attack who plotted a car and bomb attack. In August that year, an attacker drove a car into a group of soldier, injuring 6. Earlier this year, a jihadist attack inside a prison in Conde-Sur-Sarthe resulted in two prison guards being injured.

Although the scale of fatalities and injuries has declined dramatically in recent years, France remains on high alert.