The Life & Crimes Of Tommy Robinson 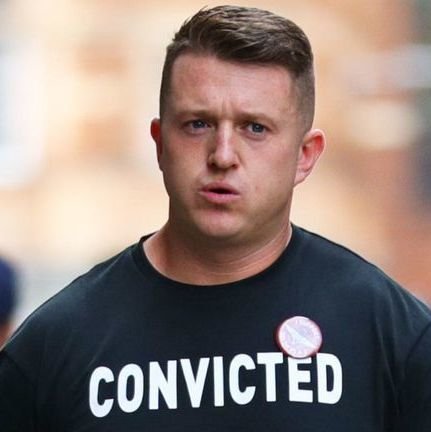 Between running for office as a Member of European Parliament, guest-starring on notorious US news outlets, and headbutting his own supporters, Tommy "Stephen Yaxley-Lennon" Robinson has seen it all. This article highlights the crimes, chaos, and carnage caused by the 2018 winner of "Patriot Of The Year". (This page is updated regularly.)

2005 (April) – Convicted of assaulting an off-duty police officer who had intervened to protect Robinson's girlfriend from Robinson himself. He served a 12-month prison sentence.

2011 (April) – Headbutts a man in Blackburn and is later convicted of assault, he is given a 12-week jail-term suspended for 12 months.

2011 - Convicted of using "threatening, abusive or insulting behaviour" during a fight between supporters of Luton Town and Newport County in Luton the previous year. Robinson reportedly led the group of Luton fans, and played an integral part in starting a 100-man brawl, during which he chanted "EDL till I die". He was sentenced to a 12-month community rehabilitation order with 150 hours' unpaid work and a three-year ban from attending football matches.

2011 (July 25th) – Anders Breivik, the perpetrator of the Oslo/Utoya attack which killed 77, is believed to have links to the EDL. In his manifesto he states he had 600 EDL friends on Facebook, and allegedly met several members including Daryl Hobson who organised their demonstrations.

2011 (September, est) - During a public speech at a demo in London, Robinson states "Every single Muslim watching this... on 7/7 you got away with killing and maiming British citizens... we have built a network from one end of the country to the other end... the Islamic community will feel the full force of the English Defence League if we see any of our British citizens killed, maimed, or hurt on British soil ever again.".

2011 (September) - Robinson was arrested again after an EDL demonstration in Tower Hamlets in September 2011 for breach of bail conditions, as he had been banned from attending that demonstration. Robinson was released on bail on 12th September.

2011 (September 29th) - On 29 September 2011, Robinson was convicted of common assault after headbutting a fellow EDL member at a rally in Blackburn in April that year. He was sentenced to 12 weeks' imprisonment, suspended for 12 months.

2011 (November 8th) - Robinson held a protest on the rooftop of the FIFA headquarters in Zürich against FIFA's ruling that the England national football team could not wear a Remembrance poppy symbol on their shirts. For this he was fined £3,000 and jailed for three days.

2012 (February 12th) - A Channel 4 documentary "Proud and Predjudiced" is aired following Robinson during his time at the English Defence League, during which he jokes about the Norway Oslo/Utoya attacks. Whilst referring to a Muslim security guard he insists "Breivik will shoot them all. I'm from Norway and I'll shoot you.". Minutes later, he attempts to throw stones at two police officers.

2012 (October) - Robinson was arrested and held on the charge of having entered the United States illegally. Robinson pleaded guilty at Southwark Crown Court to using someone else's passport to travel to the United States in September 2012. He is sentenced to 10 months imprisonment and was released on electronic tag on 22 February 2013.

2012 (November) - Robinson was charged with three counts of conspiracy to commit fraud by misrepresentation in relation to a mortgage application, along with five other defendants. He pleaded guilty to two charges and in January 2014 was sentenced to 18 months imprisonment. Robinson's fraud amounted to £160,000 over a period of six months.

2014 (October) – Recalled to prison in October for breaching the terms of this licence. Having been released on license in June 2014, the terms of his early release included having no contact with the EDL until the end of his original sentence in June 2015.

2016 (August 27th) - 18 Luton Town football supporters, including Robinson and his family, were ejected by police from a Cambridge pub on the day of the Cambridge United versus Luton football match.

2017 (May) -  Arrested for contempt of court after he attempted to take video of the defendants in an ongoing rape trial outside Canterbury Crown Court. He recieves a 3-month sentence suspended for 18-months.

2017 (June) - Robinson was involved in a fist fight at Royal Ascot.

2018 (January) – It is revealed that Finsbury Park attacker Darren Osborne received and read emails in the days leading up to his van attack outside a London mosque. Robinson's tweet mocking people for responding to terrorism with the phrase "don't look back in anger" was found in the note at the scene of the attack. Robinson responded on Twitter to the Finsbury Park attack, writing, "The mosque where the attack happened tonight has a long history of creating terrorists & radical jihadists & promoting hate & segregation," and, "I'm not justifying it, I've said many times if government or police don't sort these centres of hate they will create monsters as seen tonight." Robinson's statements were widely criticised in the media as inciting hatred. Commander Dean Haydon of Scotland Yard's counter-terrorism command said that online material from Robinson had played a "significant role" in how Osborne was radicalised and "brainwashed".

2018 (March) – In Rome, Italy, Robinson threatens a migrant by insisting "I'll put you to sleep, bruv!", before pushing him forcefully onto a car. He then punches the migrant to the ground, later claiming he acted in self-defence.

2018 (March) – Robinson is permanently banned from Twitter for violating its rules on "hateful conduct".

2018 (May) - Robinson was arrested for a breach of the peace while live streaming outside Leeds Crown Court during the trial of the Huddersfield grooming gang on which reporting restrictions had been ordered by the judge. The media reported that Robinson had admitted contempt of court by publishing information that could prejudice an ongoing trial, and had been sentenced to 13 months' imprisonment. Justice Marson sentenced Robinson to ten months for contempt of court and his previous three months' suspended sentence was activated because of the breach.

2018 (November) - At a UKIP meeting on 30 November, Robinson sat with Daniel Thomas, a convicted kidnapper who he later created a lockdown with outside a Glasgow South MPs political surgery.

2018 (October) - After a Syrian refugee boy was assaulted in a school bullying incident in October 2018, Robinson falsely accused the victim of having previously attacked two schoolgirls. The 15-year-old refugee was dragged to the floor by his neck and told by his attacker, "I'll drown you", while water was forced into his mouth. A 16-year-old boy believed to be the attacker, who was interviewed by police and given a court summons, had shared numerous social media posts by Robinson. On Facebook, Robinson subsequently posted a screenshot of a message from a mother saying her daughter had been bullied and he accused the refugee of being the bully. However, the mother responded on Robinson's Facebook page informing him this was false. Robinson also made a false allegation using a photo stolen from a news article on a teenage cancer patient.

2019 (January) - Robinson livestreamed himself causing a lockdown by leading a group that surrounded a library where the Glasgow South MP, Stewart McDonald, was holding a surgery. The group included the convicted armed kidnapper Daniel Thomas. The library was reportedly bombarded with phone calls.

2019 (February) – In a leaked video, Robinson describes a taxi driver as "a little Paki who drives a car", and insists that he "can score" drugs wherever he goes.

2019 (February) - Using his Facebook account, Robinson wrote "I guess it's ok to rape white women then?" next to a Rape Crisis flyer about specialist services for ethnic minority victims, resulting in hundreds of racist and abusive phone calls to the centre from Robinson's supporters.

2019 (February) - Facebook and Instagram banned him from their platforms citing violations of their hate speech rules including "calls for violence targeted at Muslims".

2019 (March) - On the 4th March 2019, at 11pm, Robinson arrived uninvited outside the home of a journalist who covers far-right issues and attempted to intimidate him. Robinson revealed the journalist's address on a livestream and threatened to reveal the addresses of other journalists. He left after police arrived, but returned at 5am.

2019 (April) – Robinson is banned from Snapchat for violating their community guidelines, which prohibit hate speech and harassment.

2019 (June) – Robinson is videod punching a man in the back of the head, knocking him to the ground, before a UEFA Nations League game between England and the Netherlands. Robinson claimed he was acting in self-defence.

2019 (July 7th) – Not for the first time, Robinson appears on notorious US outlet InfoWars to ask President Trump for political asylum. InfoWars created controversy after denying the 2012 Sandy Hook massacre happened and insisted it was a government "gun-grab", claiming that victims of the killed were simply "crisis actors" who were in on the plot. InfoWars other controversies include accusing Democrats of running a paedophile ring in the basement of a pizza parlour that has no basement, accusing an innocent man of being the Parkland shooting perpetrator, and insisting that NASA is running a child slave colony on Mars (which they deny).

2019 (July 11th) – After a long-awaited retrial, Robinson is convicted of contempt of court on three counts and is sentenced to serve 9 months behind bars (reduced to 10 weeks after time already served). Two judges at the Old Bailey insisted that Robinsons actions “amounted to serious interference with the administration of justice”, as lawyers for two defendants applied to have the jury dismissed on account of Robinsons actions.

2019 (July 11th) – After Robinson is convicted, various supporters attack a BBC film crew outside Parliament; four people are arrested. Others hurl smoke bombs and bottles at the police.

2019 (July 18th) – For the duration of his sentence, Robinson leaves his affairs within the control of Australian activist Avi Yemini, who soon after pleads guilt to assaulting his ex-wife as well as two other charges.

2019 (July 23rd) – Robinsons former camerawoman Lucy Brown allegedly insists that members of Tommy Robinsons group are "attention seekers that are prone to violence". She also insists that "thousands of pounds" of donors money is spent on cocaine.

2019 (October) - After a June 2018 "Free Tommy Robinson" protest in Whitehall descended into violence, in October 2019 fourteen people are jailed for their part in the chaos. Police insisted that more than 20 officers were injured by Robinsons supporters, having had glass bottles, scaffolding, barriers, and more thrown at them.

2019 (October) - In light of Robinsons assault on a man before a Nations League game in June this year, police push to have him banned from all England international games, both home and away.

2020 (March 2nd) - Robinson is arrested and charged with "common assault" after slapping a man whom he believed had molested his daughter at a Bedfordshire Centre Parcs.

2020 (March 12th) - Robinson appears in court to face a libel claim by a teenage Syrian boy who was videotaped being bullied at his school, Robinson had previously insisted he was “not innocent and he violently attacks young English girls in his school” and that he threatened to stab another student. The court learned that Robinsons "racist invective" lead to the young boy and his family being targeted by far-right supporters.

2020 (May 20th) - Robinson supports Britain First leader Paul Golding as he appears in court on terrorism charges. Golding is convicted of breaking Schedule 7 of the Terrorism Act and is given a £750 fine and a suspended sentence.

2020 (June 6th) - Robinson is arrested on suspicion of assault after an incident in Barrow. Robinson claimed he acted in self-defence after a man allegedly spat at him. Three others were also arrest and released on bail.

2020 (November 5th) - Robinson "cries" as he is arrested at Hyde Park in London, presumably after breaching UK Coronavirus regulations.

2020 (November 30th) - In regards to the incident at Centre Parcs, Robinson is convicted of common assault and is given 300 hours community service as well as being ordered to pay court fees.

Tommy Robinson EDL
The Fall From Disgrace Of Milo Yiannopoulos: A Portrait
Comments