The Downside To Vigilante "Paedo Hunters" 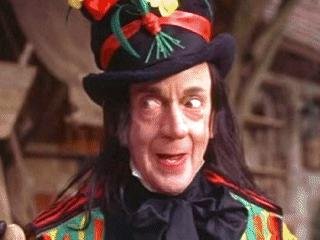 As social media develops throughout the years one thing that has also taken off is the concept of online “vigilante paedophile hunters”. These activist groups have become significantly more common in recent times and it is believed there is around 200 “hunters” groups operating throughout the UK. Hunters generally operate through social media such as Facebook although lesser known chat rooms are frequently used to catch a predator. Although many hunter groups receive praise and adulation from their followers online, they have more than regularly come under scrutiny from police and child protection services and organisations.

Arguably the most successful and well-known hunter group “Dark Justice” have a string of convictions credited to their efforts and admittedly appear to be a textbook way carrying out their “stings”. Their “confrontations” are generally peaceful and do not create a public scene and they wait until after a conviction has been secured before posting their videos publicly therefore only those definitely in the wrong will be publicly shamed. On the alternative side however, other hunter groups (such as “Safeguarding Kids Online” and “Southampton Trap”) do not follow the same basic common sense procedures when carrying out their stings and have arguably on many occasions become an overall detriment to society on the whole. Although “paedo hunters” in some ways have positive intentions at heart their actions in many ways can be highly detrimental to police efforts and to society. 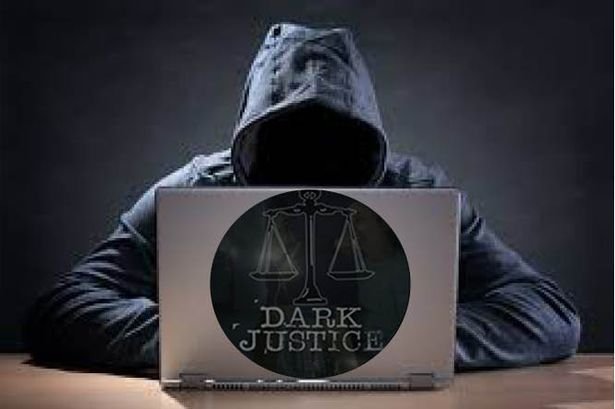 Dark Justice, one of the only vigilante groups who appear to do it correctly

It is not uncommon for vigilante hunters to inadvertently interfere in police efforts to secure a conviction against a suspected paedophile, and in the end to have a highly detrimental effect due to their own reckless methods and behaviour. This is understandable and in some ways almost inevitable; police officers train for years to learn how to properly survey and capture a suspected sexual offender, yet many hunters are simply regular people who either start up their own duo and Facebook group, or who simply respond to a Facebook post looking for hunters. It is inevitable, therefore, that the sheer outright amateur tactics of the hunters could impede sophisticated and intricate police investigations.

One astonishingly common school-boy error that is repeatedly carried out by hunters is to doorstep their suspects. Given that the hunters have no legal right to enter the suspects premises and to seize laptops, computers, phones, or any other technology that may have been used within the crime,  they can only go so far (the front door), unlike the police who can enter and seize offending equipment instantly and legally.

Between the hunters first introduction and the police eventually arriving, and bearing in mind the drastic increase in police response times over the years, this gives the suspect valuable time to hurriedly delete any incriminating evidence or to destroy hardware entirely. In one sting that was broadcast live on Facebook (at approximately 4:40 in the video) the hunters admitted to the suspects baffled parents that "he could be upstairs deleting stuff" whilst they waited for police to arrive forty minutes later. One other suspect in Kilmarnock simply refused to open the front door whilst the hunters shouted from the outside.

These mistakes are astoundingly basic and frighteningly common from various hunter groups, and the damaging consequences of this could be that suspects delete incriminating evidence relating to other real-life victims (the hunters use decoys). Suspects may be attempting to lure several other real-life victims and may have already left a string of victims throughout the past. Given that the hunters reckless methods essentially gives the suspects a head-start to delete evidence this could mean that real-life incidents may go without investigation and real-life suffering victims may go without helped. On a far more disturbing note, it is not uncommon for paedophiles to be part of an online network, one that could perhaps be brought down with sophisticated police investigation who secure evidence from one culprit which then leads to a domino-effect of convictions. However, with the methods commonly used by hunter groups this can essentially give the suspect a heads up to warn other child abusers within the network.

A (reasonably) similar example could be when online vigilantes “Anonymous” took down various Islamic State Twitter accounts and celebrated this as a victory against the notorious terrorist group. However, it was soon discovered that international counter-terrorism security services already knew about the accounts and were monitoring them for security purposes. As a result, Islamic State supporters were relieved of the surveillance they never knew they were under, and that security services had to discover this new network all over again which, giving the terrorists a head start.

More often than not the suspect and the hunters are not the only one involved in their confrontations, as family, friends, and co-habitants are also often reluctantly thrown into the encounter. In one sting the hunters doorstepped a 28 year old man and broke the news to his mother that her son was to be arrested on child sex offenses... broadcast live on Facebook. In another livestream, the elderly parents of a suspect believed they were being blackmailed before the hunters accused the innocent father of being a “vile man” amongst numerous other insults. Other families have found out of their relatives offences through seeing the video online, and not through being informed of the news in a calmer and less stressful manner. For accusations of child-sex offences there is a way to let the family and friends of a suspect know what their friends or relatives have done in a less aggressive and outlandish way, it is not through being door-stepped or seeing it on Facebook live.

Given that live stings garner an audience (with some videos being watched back by hundreds of thousands of videos) this can lead to relatives receiving abuse after the culprit becomes known on social media. Hunters almost always post the name and rough location (such as the city and area they live in) on the page and given that many of them broadcast live on the perpetrators doorstep this can lead to people recognising where the person lives and abuse being sent to their innocent co-habitants. One woman received death and rape threats after her father was accused of trying to meet a 15 year old girl for sex (he killed himself two days after being questioned and released by police).

The family and friends of a predator will most likely be the ones who suffer the most, whether by brutally finding out of their crimes through Facebook or through being targeted by other so-called vigilantes. These people have done nothing wrong and deserve due care and sensitivity in what is most definitely likely to be a nightmarish time in their lives.

Given hunters head-on attitude to what should be an intricate operation it is inevitable that severe mistakes will be made and people will be wrongfully accused. Vigilante justice is rarely, if ever, done with a clear head and in the past has had drastic to fatal consequences for those wrongfully targeted, from the paediatrician accused of being a paedophile by illiterate vigilantes, to the Mexican duo burned alive over WhatsApp claims they were child snatchers. Predator groups themselves have on numerous occasions made chronic errors that has led to the targeting of entirely innocent people. In Hull, an entirely innocent gay couple were dragged from their car, beaten, and abused by hunters who livestreamed their confrontation with the mistaken duo. Another hunter was jailed for falsely accusing a man of grooming teenagers, an accusation that lead to the man being sacked from his job as well as having his home vandalised on numerous occasions. In Midlothian (Scotland), a husband and wife duo were given anti-social behaviour orders for "hounding" an innocent man "purely for entertainment".

In many instances on social media once someone is wrongfully accused that becomes their reputation regardless of innocence, known as a “trial by social media”. Many people rarely bother to check the integrity of what the see online therefore if someone comes across the video later, many will not fact-check to see if the accused was actually guilty. Some videos can be viewed hundreds of thousands of times before the alleged perpetrator is found to be innocent, and even after being cleared their name online can be tarnished with just an accusation alone.

Whilst door-stepping a suspect can bring severe problems in itself, so can confronting them in public (in fairness, accusing someone of being a paedophile is rarely likely to be welcomed in any instance). Although a public confrontation brings the advantage that the accused cannot delete evidence off their laptops, computers, etc (although some suspects do flee the scene and lose the hunters behind them), this also bring the problem that tensions could escalate to involve the general public.

One incident (involving convict Kyle Fourie) the hunter publicly confronted the suspect in a quiet and sleepy residential street, loudly shouting abuse before threatening a bus driver that he'd be convicted for interfering with a case if he let the suspect onto his bus. The hunter also begged children passing by “Please do not f**k up my case!”, before shouting abuse at passers-by. More severely, on numerous occasions brawls have erupted during confrontations involving angry members of the public. Vigilante group “The Hunted One” ceased broadcasting live stings after one confrontation lead to a brawl ensuing at Bluewater Shopping Centre in Kent. 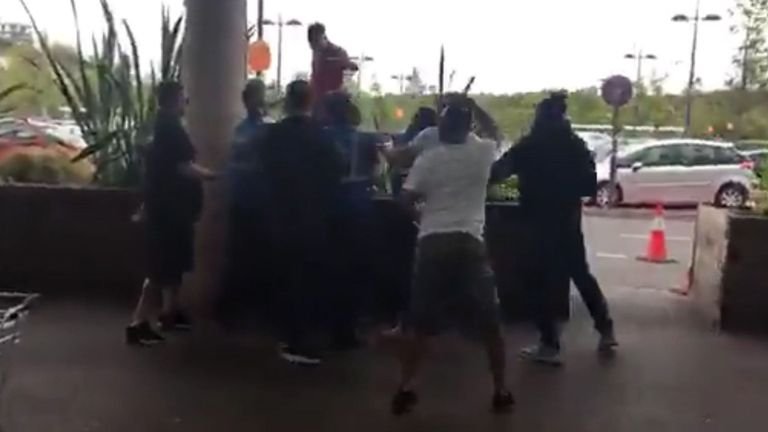 A screenshot of the livestreamed brawl in Bluewater Shopping Centre (Kent)

Indeed, even the entertainment side brings more than one problem itself. The desire to create new content is for many hunters a driving factor, therefore the incentive is there to deliberately try and move an innocent conversation along just for the sake of making videos. There are numerous “paedo hunter” groups vying for likes, follows, recognition and attention, therefore this puts pressure on them to deliver more content. As a result this could lead to them trying to hurry along incrimination from the perpetrators. One former hunter who left the group Huntz 2 Exposure revealed how her fellow activists offered her tips on how to get a “result” when conversations with potential suspects were not becoming sexually aggressive enough.

Aside from the legal perspective of paedophile hunting and the effect that it can have on their family, friends, and the general public, the societal question that needs to be asked is have we really sunk this low to the point that such confrontations have been a new and rapidly growing medium of entertainment? Has entertainment and society sunk so low to the point that even notorious broadcasts such as The Jerry “Worst Show On Television” Springer Show looks like QI in comparison? 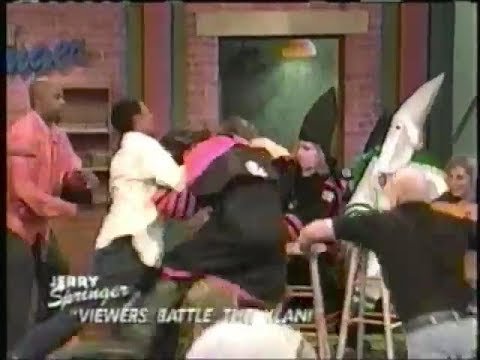 The notorious Jerry Springer Show during its "better" years

There is no real need to broadcast stings live and it brings absolutely no additional help to the investigation whatsoever; the only benefit that broadcasting live accrues is to bring a hoard of Facebook likes and follows.

Society shouldn't be making junk-food entertainment and comment-like-follow celebrities out of the hunters given the dire and sordid nature of what is involved.