Why "No Notoriety" Will Struggle In The Social Media Age 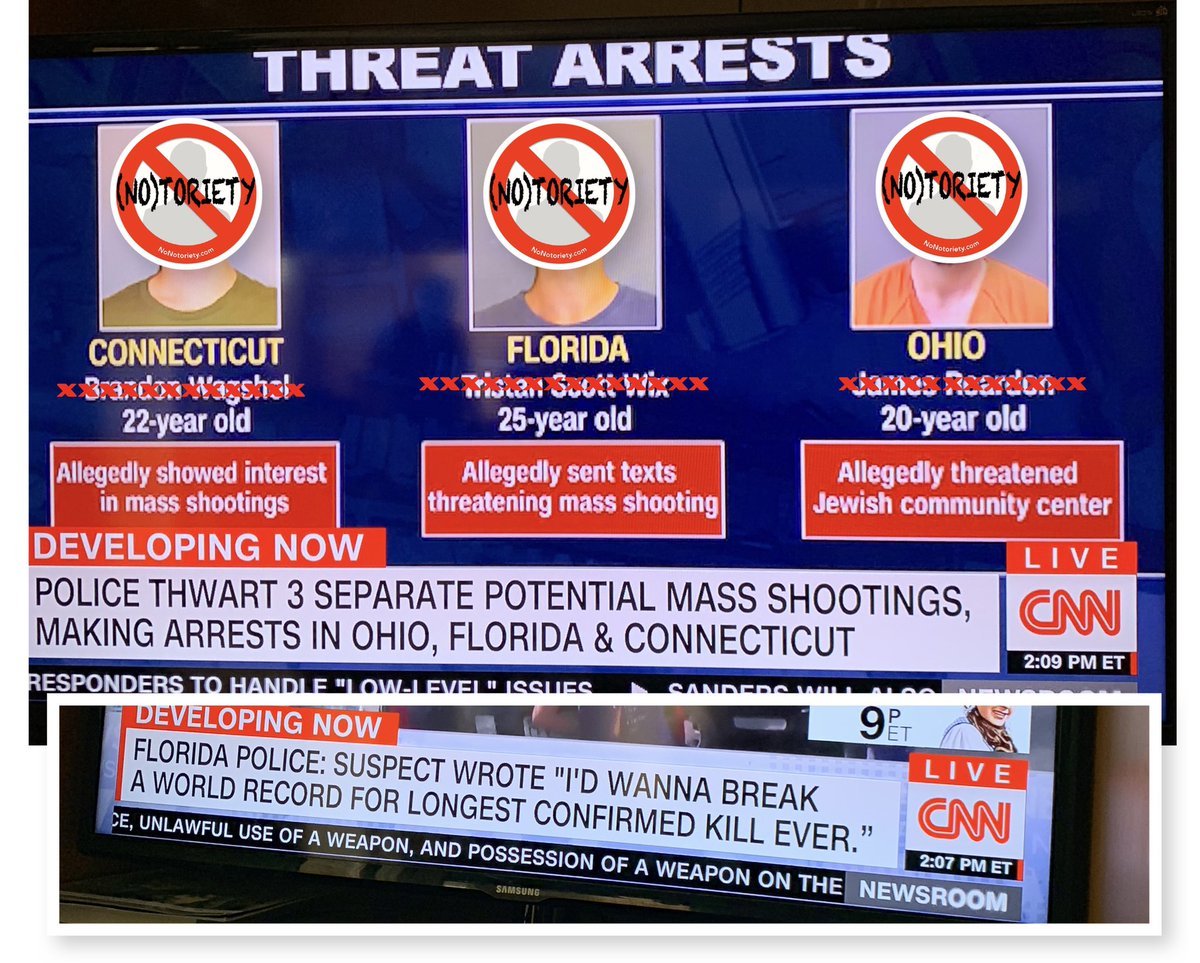 Gun violence has been a consistent and recurrent crisis across the United States over the past several decades, particularly over the past few years after numerous high-profile attacks such as those carried out in El Paso (2019), Parkland (2018), Las Vegas (2017), Orlando (2016), and Charleston (2015). This year alone (2019) has seen the United States suffer at least five public mass-murders with numerous smaller attacks also carried out.

In response to this consistent gun violence numerous efforts have been made in order to prevent attacks in various different ways. Several public places of risk such as schools and houses of worship have stepped up their security measures by hiring armed guards for protection. One school in Michigan is due to spend around $48,000,000 to build its corridors in a rounded design in order to mitigate the severity of a potential mass-shooting. An increase in see-something-say-something reports after the El Paso terrorist attack saw numerous people arrested under suspicious they were plotting an attack, including one man in California who was believed to have been planning an attack on co-workers at the Marriott hotel he worked at.

One relatively new concept appears to be gaining traction across police forces and media outlets across the nation. The concept of “No Notoriety” consists of pressuring and encouraging the media not to focus on the name and face of the attacker for fear it may make them famous and therefore inspire copycat attacks. This line of thinking has also been carried out by several police forces such as with the Roseburg college shooting in 2015. Recently, this method was used by police in Texas after the Odessa and Midlands shooting. The police had prior claimed they wouldn't release the name or a photo of the attacker for some time, only to release them both about an hour later. Numerous media outlets or programmes such as Anderson Coopers show on CNN have also taken this approach, amongst others.

However, whilst the concept may have good intentions it faces an uphill battle in the modern day, and for several reasons.

Whilst some smaller news outlets have committed to following these guidelines of reporting, many media outlets lack co-operation towards these methods. Some outlets believe that it is important to showcase the person behind the attack in order to raise awareness of who could be a mass-shooter, even if they don't fit a stereotypical profile of one. Others may believe strongly in exercising their rights to free speech, whilst some believe that accepting a “No Notoriety” concept as beneficial is a roundabout way of inadvertently accepting guilt for inspiring previous shootings. Furthermore, some activists insist this concept is side-stepping the real problem of US gun violence (of which many believe to be availability of guns). As one of the many ideas put forward of trying to prevent US gun violence it is understandedly swamped by many other concepts and suggestions of how to end the United States gun violence epidemic.

Arguably a majority of mass-shootings throughout the USA throughout the year are gang or family related therefore aren't motivated by fame. Furthermore, out of the several hundred mass-shootings that are occur annually in the country a lot of them don't do anywhere near enough to create notoriety, such as those with few killed or injured. The United States has literally hundreds of mass-shootings a year and even around 25 mass-murders carried out with guns, statistically almost all of which are ignored by national media. Ironically the fact that there is so many mass-shooting attacks will mean less notoriety to the perpetrator as they become more common therefore less news-worthy and as a result easier to look over.

Additionally, a lot of well-known public mass-shooting attacks are motivated by something other than fame and notoriety, such as workplace violence following a dismissal (Aurora factory, Virginia Beach), revenge (such as Capital Gazette), or a spontaneous reaction following an argument (such as the shooting perpetrated at a Torrance bowling alley or a Kansas City tequila bar). In terms of the worst mass-shooting in US history (the Las Vegas massacre) the gunman Stephen Paddock appeared to be a quiet and secretive person who kept almost entirely to himself.

Going Round In Circles

Major left-wing inspired terrorist attacks are rare, a far more significant threat comes from right-wing extremism (ignoring the threat of jihadist terrorism as it is done specifically to garner as much attention as possible). It is entirely likely that these people will be looking for notoriety, attention, or a reaction from their attack, and numerous right-wing terrorist perpetrators had already given a heads-up about their attempts on social media such as Gab, 4chan, or 8chan. The problem is that even if right-wing perpetrators fail to receive world-wide or nationwide coverage and infamy they will almost certainly be idolised, praised and martyred within their own extremist right-wing circles online For many attackers this will be more than sufficient enough not only to satisfy their desire for notoriety, but also to inspire others to achieve a similar kind of infamy. Isla Vista “incel” terrorist Elliot Rodger was martyred by online “shitposters” after his attempted assault on a Californian sorority house, and this later inspired the Toronto truck ramming in Canada from a like-minded attacker. The attacker referenced Rodger as the “Supreme Gentleman” (a nickname given to him by online circles) who saw him as the “founding forefather” of such a terrorist movement.

This martyrdom and sainthood amongst a specific group of like-minded individuals is more than enough to inspire future attackers, whether this is Dylann Roof amongst white supremacists, Brenton Tarrant to anti-Islamic attackers, Patrick Crusius to anti-Hispanics, and so on. Many of these people, whether they are literal aspiring terrorists or just “edgy shitposters” will actively go out of their way to honour and glorify a like-minded attacker. These like-minded individuals will undoubtedly seek out such attacks and this inevitable.

Whilst TV news stations and newspapers can agree not to name the perpetrator, social media cannot be regulated in this same way and people can post photos of and discuss the perpetrator if they so wish. In the modern day social media is becoming increasingly important for people who are trying to find the latest news as fast as possible. Many people turn to social media for information because (1) they're obsessed with social media in the first place, (2) it's interactive and you can discuss the matter with friends or other people, and (3) because news develops faster online than through mainstream media. This creates a huge problem for the concept of “No Notoriety” as each individual user on social media cannot be regulated and cannot be forced to adhere to a “No Notoriety” guideline, many of whom will not even be aware of such a concept in the first place. Here, social media posts showing the name and/or face of the perpetrator can be seen hundreds of thousands of times. One entirely innocent politically-driven post regarding the Odessa and Midlands (Texas) shooter garnered over 500 likes and over 330 retweets. On top of all this, one thing that only serves to dilute the concept further is that in the modern day age of “disinformation” and an increasingly high level of distrust towards mainstream news media, this may only serve to take viewers away from major channels and instead to social media where the concept of no notoriety is unregulated. 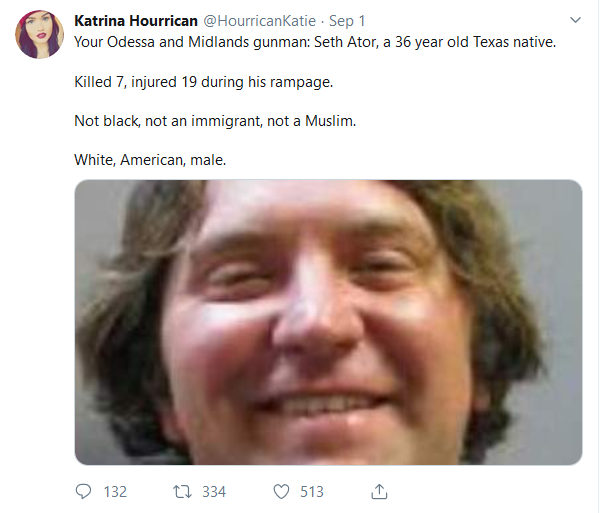 There may be additional interest in the perpetrator due to the "Streisand Effect", where people will actively try to seek out information simply because they are told not to, therefore this makes them curious to find it. While this desire to find such seemingly forbidden information will only be temporary, that is all that is needed in the aftermath of an attack when interest in the shooter is at its highest. Although the Gilroy garlic festival shooting was relatively low-impact and low-severity in comparison to other attacks this year the perpetrators name (Santino William Legan) was still trending internationally on Twitter two days after the attack happened. As a downside, the concept of “No Notoriety” may only serve to make them more notorious as it becomes increasingly taboo to talk about the perpetrator.

For the concept to have been around and in great strength in the aftermath of Columbine would have been a significant aid not just to the USA but to the world. The attack still has legions of fans across the world having garnered a cult-like following online, and many attacks have been either carried out, attempted, or plotted that were inspired by events of April 20th 1999. Given that there was no real social media in 1999 it would have been greatly beneficial had news outlets followed a “No Notoriety” approach which may have greatly diminished the cult-like status the perpetrators still receive in the modern day.

The concept of “No Notoriety” may have positive intentions however it faces an uphill battle in the modern day. Social media is fast taking over mainstream media when it comes to breaking and following news, whilst the concept will also struggle against a wave of social media “shitposters” who set out to actively glorify their chosen idol.