Gab: Too Racist Even For The Rights Most Controversial 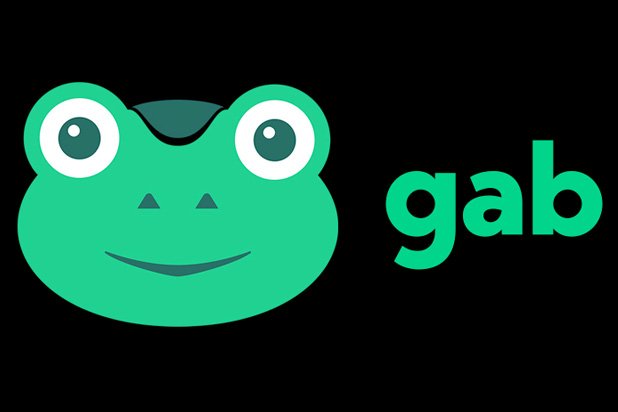 In recent years numerous apps and websites have come under scrutiny for their users exploitation of the platform for their own racist views, propaganda purposes, or towards extremist activity. Facebook, YouTube and Twitter have all come under scrutiny for being platforms abused by extremists of all kinds in their attempts to encourage and recruit attackers, as well as co-ordinating plots and to spread extremist propaganda. Various efforts have been made by these platforms over the years such as banning accounts, hiring more moderators, and utilising artificial intelligence.

More recently though, lesser known websites have shown connections in some ways to major terrorist attacks (and some smaller attempts). On a more extreme note, the notorious “Chan” series of websites appears to be a hotbed of less-than-politically-correct vitriol ranging from white nationalist memes to hosting the final send-off for terrorists before they carried out a literal terrorist attack.

In the middle of these platforms is Gab, more controversial than your average social media site but not as bad as the Chan domains (although 8chan was removed after the El Paso attack). The site (similar to a basic version of Twitter in its lay-out) prides itself as being a bastion of expression and prides itself as a huge defender of the right of “free speech”. Gab was created by Andrew Torba in the wake of a pro-Donald Trump rally in San Jose in 2016 when protesters attacked Trump supporters, however the platform grew in the months and years afterwards when numerous prominent right-wing political commentators were banned or suspended from Twitter, leading to claims they were being censored. As a result, Gab has become something of a refuge point for those kicked off Twitter as well as various other social media platforms. Those booted off mainstream social media also have the option of Telegram and Parler (both are also used predominantly by right-wing social media refugees) but Gab appears to have become the biggest of the three by far.

The lay-out of Gab, highly similar to that of major social media platform Twitter.

Amongst the collective of “social media refugees” who have taken up residence on Gab are Laura Loomer (banned from Twitter for attacking Ilhan Omar), Alex Jones of “Sandy Hoax” fame, and Milo Yiannopoulos who was permanently banned from Twitter for harassing Ghostbusters actress Leslie Jones and later banned from Facebook. Also on Gab is former-British National Party MP Nick Griffin despite still being active on Twitter (although he was dumped out of the BNP in 2014), who has accrued around 11,000 followers. The site also crept into British politics after various UKIP candidates encouraged followers to use it. In July 2019, Torba claimed Gab had over 1,000,000 accounts, although this was disputed by the sites web host who insisted the figures were far closer to "a few thousand or a few tens of thousands".

As a result of hosting numerous right-wing and far-right refugees, Gab has inevitably become predominantly right-wing itself. According to research done by Zannettou et al in 2018 which surveyed 22,000,000 Gabs by 336,000 users, the most common topics of discussion are Donald Trump and white nationalism, the most common word in a users personal description was “MAGA” which was used by 4.35% (page 1), whilst “MAGA” was also the most common hashtag recorded, at 6.06% of all reviewed.

However, given that the site prides itself on free speech, this alt-right sentiment (the same kind which helped get many users kicked of mainstream social media in the first place) goes essentially entirely unchecked. Whilst Twitter appears to be taking steps towards removing hateful conduct from its platform, Gab on the other hand appears to have become over-run with white nationalist sentiment and support, making it essentially appear to be a white nationalist alt-right version of Twitter. As Zannettou et al claim (in page 1 of the study) 5.4% of all posts surveyed included a hate word, significantly higher than Twitter, but significantly lower than the Chan forums.

Indeed, a brief look at the timeline of recent Gab posts (at the time of writing) brings up numerous individual posts of extreme far-right, white supremacist, or often times just outright Nazi propaganda. In one post, a photo was uploaded showing an olden day cartoon from around World War 2 encouraging women to do their part to help Hitlers war efforts, another showed a cartoon reminiscent of the Jim Crow times, whilst a further simply stated “Heil Hitler”.

The recurrent alt-right sentiment is only part of Gabs heavily damaged reputation however. Whilst  various cities and towns in the USA have become synonymous with terrorism (San Bernardino, Charlottesville, to name a few), the website itself became synonymous with far-right anti-Semitic terror. On October 27th 2018, 46 year old gunman Robert Bowers opened fire in a Pittsburgh synagogue, killing 11 people, and injuring another 7. Gunman Bowers was a prominent user of Gab, recurrently posting content that would have seen an imminent ban from mainstream social media. Shortly before carrying out his attack, he posted on Gab: 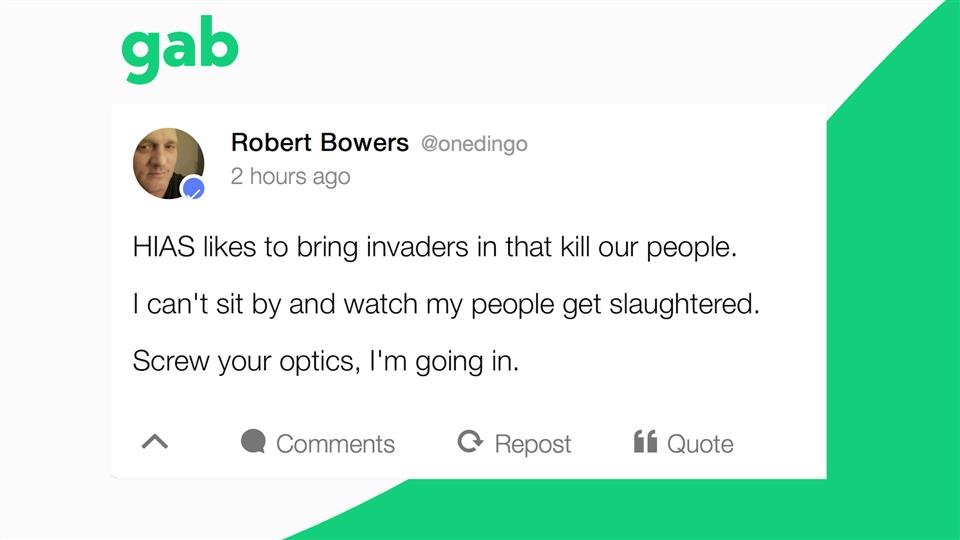 The site became synonymous with the attack. As a result of extensive backlash, the site was removed from various different websites however it managed to return several days later.

But Apart From Hate And Terrorism

Aside from being a hub for extremism and often times literal terrorists, Zannettou et al's study insisted that “... while Gab claims to be all about free speech, this seems to be merely a shield behind which its alt-right users hide.”. The irony is that this “free speech” that users are attracted to actually ends up becoming detrimental to the site itself. Gab has on several occasions been deemed too racist and too abusive even for some of the far-rights most controversial figures. Far-right provocateur and self-admitted career troll Milo Yiannopoulos (who previously made a living from angering and provoking people, and who is one of Gabs most prominent users with over 71,000 followers) criticised the site for being: “relentlessly, exhaustingly hostile and jam packed full of teen racists who totally dictate the tone and discussion (I can't post without being called a pedo kike infiltrator half a dozen times).”. 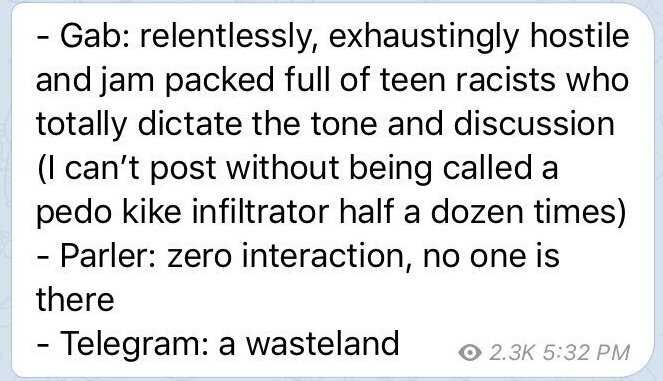 Aside from solidifying Gabs reputation as something of a Nazi-friendly Twitter, the strong and almost unanimous prominence of right-wing and alt-right users only serves to turn the site into a one-sided echo chamber. One downfall of the site mentioned by Jeff Hemsley of Business Insider is that there's no-one to argue with, or to troll or offend. For people like Milo whose career was based around offending people and starting an argument, this is as good as silence, whilst for the average user it is likely to become repetitive posting the same arguments to hear the same affirmative responses.

Surprisingly, despite it being an ardent supporter of free speech and a leading refuge point for those kicked off other platforms, it is not impossible to be banned from Gab. Christopher Cantwell, better known as “the Crying Nazi” was banned from Gab for advocating shooting leftists after the Christchurch terror attack, whilst various posts have been reluctantly removed by the site after pressure was applied by web-hosts and authorities.

Gab is far from mainstream social media and with its current reputation as Twitters alt-right younger brother it is unlikely to ever be so. The site may have been given new life after the El Paso terrorist attack that lead to 8chan being taken down, however, if Chan residents emigrate to Gab, then Gab is likely to suffer as a result. Given that its reputation is currently that of a white-Nationalist platform that gave a platform to Robert Bowers, its visitor numbers may rise but its reputation is, as the song says, pedal to the metal on a downhill slide.